Playing Well With Others, At Work 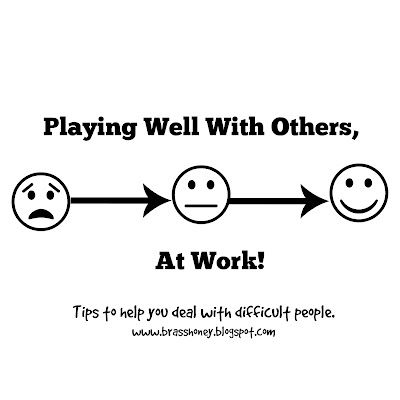 It's Saturday and I'm sure the VERY last thing you want to think about right now is work.  Shit, some of you may even have a long weekend ahead of you.  The thing is, if I don't get this post out today I'm going to have to rewrite the opening sentence.  A sentence I wrote on Monday.  I don't want to do that so here we go, we're thinking about work on a Saturday morning.  You're welcome!
Last week I took one of those cheesy two-day communications seminars, "Communicating With Tact, Diplomacy and Professionalism".
I know, I know, like that entire opening paragraph was necessary for the above sentence.  What can I say it was a matter of principal!
Anyways in case you don't know this about me, I earned my degree in Communication Studies.  A long time ago.  Long before I had any actual experience working with people in a professional capacity.  Long before I had real life situations I could apply what I learned to.  Long before I even really cared about communicating.

The honest to goodness truth is that in the eleventh hour I changed my major for the eight time so that I could finally graduate.  I actually use to brag because I graduated with so many more credits than what was required.  Crazy!

The point I'm trying to get to here is that a lot of the material covered in last week's seminar wasn't exactly new to me.  More than a decade after earning my degree though it served as a great reminder that there are things I can do to better communicate with people I've struggled to have good working relationships with in the past.
Which brings me to one last bit before we actually dive in.

For me, the interactions I have with the people I know don't like me or that I don't like are always the hardest.  I really do think the tips I about to share will a great help though.  I've already put them to use and am quickly seeing results.  So here goes:

1.  Seek first to understand and then be understood.  People are a lot more likely to listen to you if they feel like they've been listened to.  Sounds simple enough right?  This is tricky though isn't it?  I mean how often do you raise your voice and immediately start talking so that you can get your points across?  Like being the loudest and first to talk is the only way to be heard.  Think about any heated argument you see on reality t.v.  I mean can't you picture all the housewives screaming and talking at once during a reunion show.  Nothing's actually be accomplished.

2.  Explain yourself not because you have to but because it helps people who don't trust you understand your reasoning.  Basically get over yourself!  I've struggled with this one for a long time.  Right off the bat this internal dialogue starts to take place when someone questions me.  "I don't need to tell you why I made the decision I made.  God, what is wrong with you!  You should trust that I made the best decision possible because I am an ethical and considerate person."  I don't know about you but following that internal dialogue I become incredibly defensive which I'm certain is part of the reason the person in question doesn't like or trust me in the first place.  Vicious cycle.
3.  If you don't address and correct inappropriateness than you're saying it's ok.  AKA, what you permit you promote.  I'm actually ashamed by the amount of inappropriateness I've let slide, particularly when it comes to how I've let people talk to me and my team.  The next time a situation like this occurs I'm going to turn it around and ask whomever it is if there's something I've done to offend them.  Often times when someone does something inappropriate we freeze up and are unable to respond because whatever just transpired is typically so out of line.  Having this little gem in my back pocket will absolutely be helpful.  With that said you have to be prepared to ask the same person the question "is there something I've done to offend you" multiple times.  Changes are the person you're asking will be thrown off guard by the fact that instead of freezing up you actually had a response.
I'm trying to kick butt in this department J.  I want to know what the most positive thing is to have happened to you today.  To share my greatest success for the week.  How cool is it to catch someone doing something right and praise them for it instead of focusing on all the people messing up?
5.  Understanding what people value and fear will help you adjust the way you communicate with them.  The last hour of the seminar we took a short quiz to determine our communication styles.  I’ve taken dozens of these types of quizzes but found this one helpful none the less.  If you’re interested I'd be more than happy to email you a copy?
The gist is this:
Imagine a large square divided in quarters.  Inside each quarter of the square is a different communication style (relater, initiator, thinker, director).  The location of your communication style (which is determined by selecting the characteristics that best describe you) in relation to the other styles determines how well you typically work together.  For instance the style diagonal to your style is supposed to be the style that you have the most difficult time communicating with.
I already knew my communication style but what was helpful was the list we were given of the qualities and traits valued by each style.  We were also given a list of the things that each style feared the most.  Right off the bat just having these lists helped me to better understand why I struggle when working with a particular style of communicator.
Let's just say you're someone who's focused on getting the job done now aka. let's cut to the chase but you're working with someone who really values feelings and rapport.  These are two very different styles of communicators and they're bound to be issues!  It won't kill the person who's all business all the time to take a minute or two to build a relationship ("how are your kids", "what a great vacation photo" etc.) with the person who values people above checking the box.  Over time they'll begin to look at the person as less direct and "controlling" "rash" etc.  It's a win-win and a very small concession to make.
6.  Last but definitely not least, some people are just assholes!  You can do everything in your power to be the best possible communicator and some people are still going to act like pricks.  Don't be discouraged when you run into these people and don't let them stop you from trying to improve communication with them.  You can't control how others will behave but you don't have to let their bad attitudes control you either.
There are two people that for years now I have said hello to, opened doors for etc. and have received not a single hello or thank you in return.  One day, on a bad day I let that get to me and while holding the door open for one of them I finally snapped and said "you're welcome" as they walked through the door.  Still there was silence and all it managed to do was make me feel bad for sinking to their level.  I hated that I let myself go there but decided to ditch my ego and go on with the hellos and so on.
Some people are just creeps.  That's all there is to say about that.
I'm  really proud of this post and I truly hope you'll get some good use out of some of these ideas.  I'd love to hear if you have any experience with any of the above or if you have some tips of your own.  Have a fantastic day my friends.