One Dollar, One Idea and One Story at a Time

For my birthday this year I received a gift that literally took my breath away and brought tears to my eyes.  The box arrived on the 29th.  I remember because I was headed out the door to get my make-up done for the Taylor Swift concert.  My excitement for the night's events almost stopped me from opening the package but something told me to open the box before I left.  I sat down on the doormat and I tore into the brown packaging.  Inside a framed map of Paris. 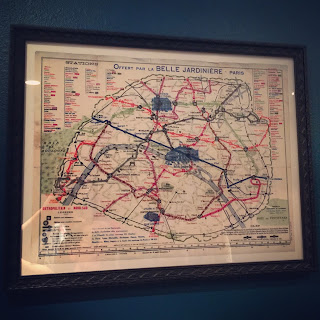 One of the most meaningful gifts I've ever received.  Made even more meaningful because I know the sender had no idea what an impact their gift would have on me.

This particular gift symbolized a dream that I know will one day come true.  It helped me to believe in myself.

Last year I started talking about taking a trip to Paris but I quickly brushed the idea off.  I'm not the kind of girl that goes to Paris.  Paris is expensive.  Paris is so far.  Paris is for girls who are loved.

It took the map for me to see that I am the kind of girl who goes to Paris.  Why wouldn't I be?  I don't know why but sometimes it takes having someone else believe in your dream before you can believe in it yourself.  I guess I needed validation.  Without question this trip seems overwhelming.  How will I pay for such an extravagant trip?  Dar and I have been known to take expensive vacations but I think I want to go this one alone.  This is my dream after all, not his.

To help me not be paralyzed by negative thoughts and questions I've started saving one dollar at a time, or rather $40 at a time  It's a small amount but it easily goes unnoticed and over time will get me to Paris.

Dreams get tossed aside because they feel too big, too overwhelming, unattainable.  We're so used to getting things we want right away that the idea of saving and working for something seems defeating.  I hate that.

Paris isn't my only dream...

If things go according to plan (which I've recently learned doesn't always happen) Dar and I will be retiring from our full time jobs in the next seven years.  He'll be 52, I'll be 45.  When financial freedom is finally upon us, I dream of running my own business.

I've been an entrepreneur since I was five.  I've ran countless lemonade stands.  I packaged and sold mistletoe at Christmas.  I even owned and operated a neighborhood newspaper with a buddy.  Aren't we cute? 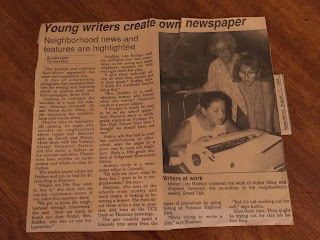 Right now though I have some pretty big responsibilities that I can't neglect.  For the next seven years I need to earn and save as much money as humanly possible so that our dream of retiring is a reality.  There is no freedom if this goal is not met.

We're so close but sometimes the thought of waiting seven more years is infuriating.

In the meantime I try to satisfy that hunger by writing down every single idea that pops into my head.  Every business name.  Every service possibly imaginable.  For now this is how I keep this dream alive.

There are two things stopping me.

1. At 36 I'm still figuring it out.  I'm on the brink of something big right now.  A growth spurt of sorts.  I can feel it in the air and in my body.  I know whatever it is I'm about to learn will be pivotal.  This won't be my only growth spurt though.  How can I write a book on overcoming challenges and living an inspirational life if I haven't yet learned all there is to know?

2. I understand that there will have to be some back story but I really don't want to focus on the past.  I've worked incredibly hard to move away from it and only recently do I think I've finally broken free.   With that said, it might be too soon for me to write this book.

My main objective is to inspire.  I want to prove that despite great challenges it is possible to be a whole person.  A happy person.  No matter what life has thrown at me I've always been able to learn and to grow and be an example and an inspiration to others.  That's a message that's worth sharing.

I think it's safe to say I've come a long way from the girl who wrote this more than a year ago.  Wish me well my friends.  All my love.  XO