Thanksgiving Recipes From The Queen Of Take-Out

As a woman, I don't know how I feel about what I'm about to disclose, but here goes anyway.  I'm the queen of take-out.  On a good week I cook once, maybe twice and by cook I mean heat something up.  D and I actually use the term "I made dinner last night" to refer to who picked up take-out.  Last week I was in our neighborhood taco shop two nights in a row picking up dinner.  That's not an anomaly folks, it's par for the course in this house.  In my twenties I really tried to learn to cook and to enjoy the art of making a beautiful meal, it just didn't stick.  In my thirties, I've learned to accept certain things about myself, and luckily D has too.

There are however a few times a year where we get our acts together and either host a dinner or make a big meal for ourselves, Thanksgiving is one of those times.  Over the year's I've found that making a few REALLY simple homemade dishes, leaves me feeling perfectly fine with buying the rest.  Today I'm happy to share my super simple Thanksgiving day recipes as well as a few of my favorite store bought items.

First up, cranberry sauce.  It amazes me how many people still buy canned cranberries.  Cranberries are by far the easiest of all the Thanksgiving side dishes, and bonus, they makes your home smell amazing.  I've been using this recipe for years now and I've never been disappointed.

Next up, the potatoes!!!  Undoubtedly my favorite part about Thanksgiving dinner (after the pumpkin pie of course).  I've been making cheddar mashed for the last few years and love the added flavor the cheese gives the potatoes.  I divert slightly from this recipe and boil my potatoes in chicken broth.  I also use salted butter instead of unsalted.  It's Thanksgiving after all, live a little. 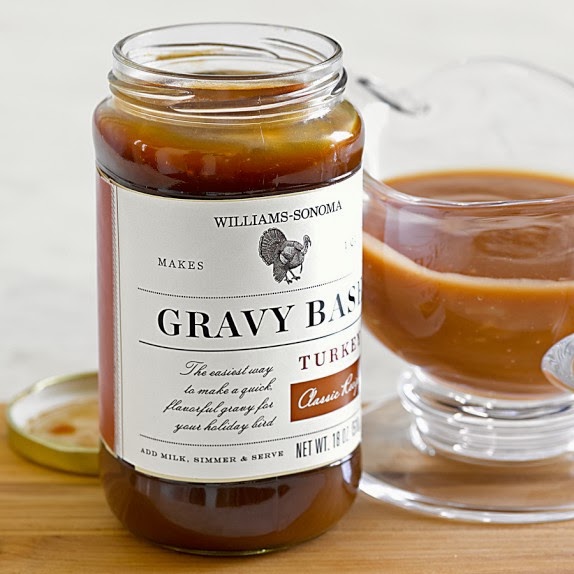 And what goes better with potatoes than gravy.  My mother-in-law makes the best, but hey, we live on the other side of the country so getting together at Thanksgiving isn't always in the cards.  I've searched high and low and have found the next best thing.   Goodbye canned and powdered gravy, hello William Sonoma Turkey Gravy Base!  It's amazing

Now onto the veg.  Sadly I went 33 years without trying brussels sprouts.  Now that I have, they're my favorite veggie.  Like most people, I prefer them roasted, and like most people, I think adding bacon to just about any dish takes it to a whole new level.  Unfortunately or fortunately, however you chose to look at it, D won't eat em.  Instead he'll be enjoying Birds Eye Steamfresh frozen corn.  One year I tried buying corn on the cob and then taking the kernels off so he could have a fresh veggie too, no such luck.  Let's just say that corn is not in it's prime in November.

As for the pies, no way, no how will you ever find me in the kitchen with flour and a rolling pin.  My advice, find a great bakery and order your pies early (like now if you haven't already)!  This year we'll be having traditional pumpkin and pecan pies from the Julian Pie Company.

Rolls, store bought, along with the Stove Top stuffing.  Stuffing is one area we could definitely improve upon.  We've tried stuffing the bird, but it always comes out soggy.  If you have an easy, fail proof stuffing recipe, please share!

And lastly the piece de resistance, the turkey.  The fate of the bird lies in D's hands (how nice of me, ha).  He actually really loves it and has always done a pre-Thanksgiving "stunt turkeys" so that he can try new recipes and methods.  One year he opted for a cajun turkey, hot damn that thing was packed with flavor (not in a good way).  Over time injecting the turkey has won out and he's learned to keep it simple with just butter, fresh lemon juice, salt and pepper.  If you haven't tried injecting a turkey, give it a go.  We've had this injector for about 5 years now and it works great.

Whatever you do, don't let cooking a big Thanksgiving dinner stress you out.  Know your limits, make a few great homemade dishes and relay on the experts to help with the rest!