The School Of Life, Week 2 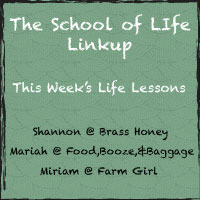 Welcome back to the School of Life.  Just like last week, this week proved to be full of learning experiences.  I mean did you know that...

1. Chipotle has fajita mix!!!  How in the heck did I only just discover that this week?  As the self proclaimed Queen of Takeout, I pick up Chippotle pretty much once a week, I have for years now (it's gotta be better for me than a fast food burger right?).  If nothing else this should go to show you just how observant I am, #notatall.  Fajita mix added to a shredded pork bowl = amazing!

2. You should always focus on the task at hand.  It's fair to say I've been a bit of a soup sandwich this week.  We women are known for our badass multitasking abilities, it's one of our strongest atributes, but sometimes I think it's one of our greatest downfalls too.  The mind can only handle so much.

The proof is in the pudding my friends.

On Tuesday I couldn't remember if I took my meds, so I took them again, and then I couldn't remember if I took them after that, so I'm pretty sure I took a thrid dose.  Wednesday and Thursday weren't much better, I had to turn the car around both days to make sure I had closed the garage door.  Two fricken days in a row.  On Friday I lost a very expensive ticket to a baseball game and then my car in the parking garage.

3. It's time for a one piece, or at least a tankini.  I've been saying this for a few years now, but it's actually time.  I saw a horrid picture of myself recently and literally wanted to hide.  When did I get so chunky?  I like food too much to stop eating like I do and as much as I'd love to be all gung ho about going to the gym, I'm just not.  I think knowing you're ready for a one piece/tankini is kind of like knowing you've found the "one".  I was all wishy washy in the past, because it wasn't right, now that it is, I can totally embrace it.  What do you think about these (here, here and here).  Do yall wear a two piece still or have you transitioned into a one piece/tankini?

4. Needing/embracing the one piece/tankini makes me feel old.  That's all I'm going to say about that.

5. Learnt is a word.  I didn't know that until last weeks linkup.

These are alternative forms of the past tense and past participle of the verb learn. ‘Learnt’ is more common in British English, and ‘learned’ in American English.

5. Drinking extra water on super hot days is imperative.  San Diego has been HOT, and no, not because of all the fires.  That's a super terrible joke I've heard at least 5 times this week, and news flash, it's totally insensetive.  I mean people have lost their fricken homes through no fault of their own.  Get a grip.

Anyways, we reached 100 degrees a few times this week.  One hundred degrees in America's finest city is just crazy.  After 3 or 4 days of this madness I had clearly become dehydrated (probably had something to do with me taking too many damn diaretics on Tuesday too).  So yeah, Thursday I go to get up from my desk and bam, I almost walk into a pole.

Now let me be clear, this does happen on occasion, like when I'm not paying attention (see #2).  I swear this was differnt, I thought I had verdigo.  A coworker went and bought me some dramamine, five or six glasses of water later, and a quick rest and I was feeling fine.  Dehydration is not cool people.  Drink water when it's hot.