Confessions Of Bargaining, Resentment and Relief. 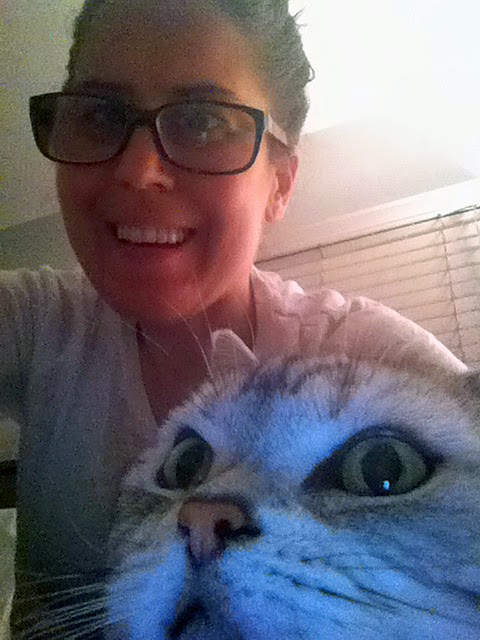 Six months ago I never would have posted this picture.  My hairs a mess, my glasses are huge, I don't even think I'm wearing a bra.  The photo itself is dark and grainy.  It was taken for us (Poochie and me), not for a viewing audiance.

Pretty, happy, positive, that's what we like to show and see.  We aim to keep things upbeat, to be an inspiration to others, to share the best versions of ourselves.  We show the pretty more often than not.  Pretty is nicer to look at and read about isn't it?

This space has been an incredibly positive one for the last month or two.  I've been proud of that because it's been a direct reflection on how things have been going in my personal life, positively.  If you've been with me for awhile now, most of you have, you know that that's not always been the case.  There's been darkness here before.

Our sweet little girl Poochie has been in ICU fighting heart failure for the last two days.  Yesterday after an EKG we learned that she has and probably has had since birth, HCM (Hyperthropic Cardiomyopathy).  My best friend and faithful companion is dying from heart disease.  I'm trying like hell to stay positive, but to be honest, I've been a complete mess.  My days with Poochie are going to be far less than I ever though.

The good news is that Poochie was taken off oxygen about 4 hours ago and as long as she remains stable, will be coming home with us so that she can live out the rest of her days at home with her family.

These are confessions of my thoughts over the last few days.

Why Poochie.  I wish it was Beeps.  I feel like an absolute monster for thinking that, but Beeps is older.  I swear I love Beeps and we're great pals, but Poochie and I, we're animal/human soul mates.  From day 1 I've said she was Darren in cat form.  I'm sorry Beeps.

I've bargained with the universe.  If Poochie makes it out and is able to come home, I won't bug Dar for a trip to the Caribbean for our 10 year wedding anniversary.

My completely empty credit card will be maxed out.  It's worth it.

WHEN  Poochie makes it home, I'll give her whatever she wants, whenever she wants it.  Treats galore.  Every sink in the house will have water running from it 24/7 for Poochie's drinking pleasure.

Communicating to my boss (a grown man and the company CFO) that I need to miss work again to be with my cat has been incredibly odd.  He's been absolutely amazing and totally understanding.  It just something I've never thought about having to do before.  My girls are my kids and that's how I talk about them.  I guess it's just never been in a professional capacity.

I've yet to even allow myself to think about what will happen a week from now,  or two months from now when Poochie's little heart does finally give out.  I'm just so grateful for the extra time I have with her.  The extra time I have to show her as much love as she's shown me.

We've been so lucky to have Poochie in our family.  Nine years just doesn't seem long enough, but I guess 18 years probably wouldn't either.

Please keep little Poochie and her family in our thoughts this week.  We need your good vibes and words of encouragement.  Until next time.  XO