Let me start this little recap by shouting from the rooftops that I SURVIVED 3 NIGHTS IN VEGAS!  That no joke is a feat in and of itself.  Vegas is a town full of excess, that's why I love it as much as I do, but excess can be pretty damn hard on your body (especially at 34).  Late nights, endless champagne, gorging on food morning, noon and night.  You get where I'm going with this.

Let's get started then, from the beginning of course.  Just a short disclosure though before I do.  I'm a review reading junkie so this will probably be long.  Also, all photos were taken with my iphone.  This girl has a bad track record of drinking and then losing expensive things so I wasn't about to tote around a camera. 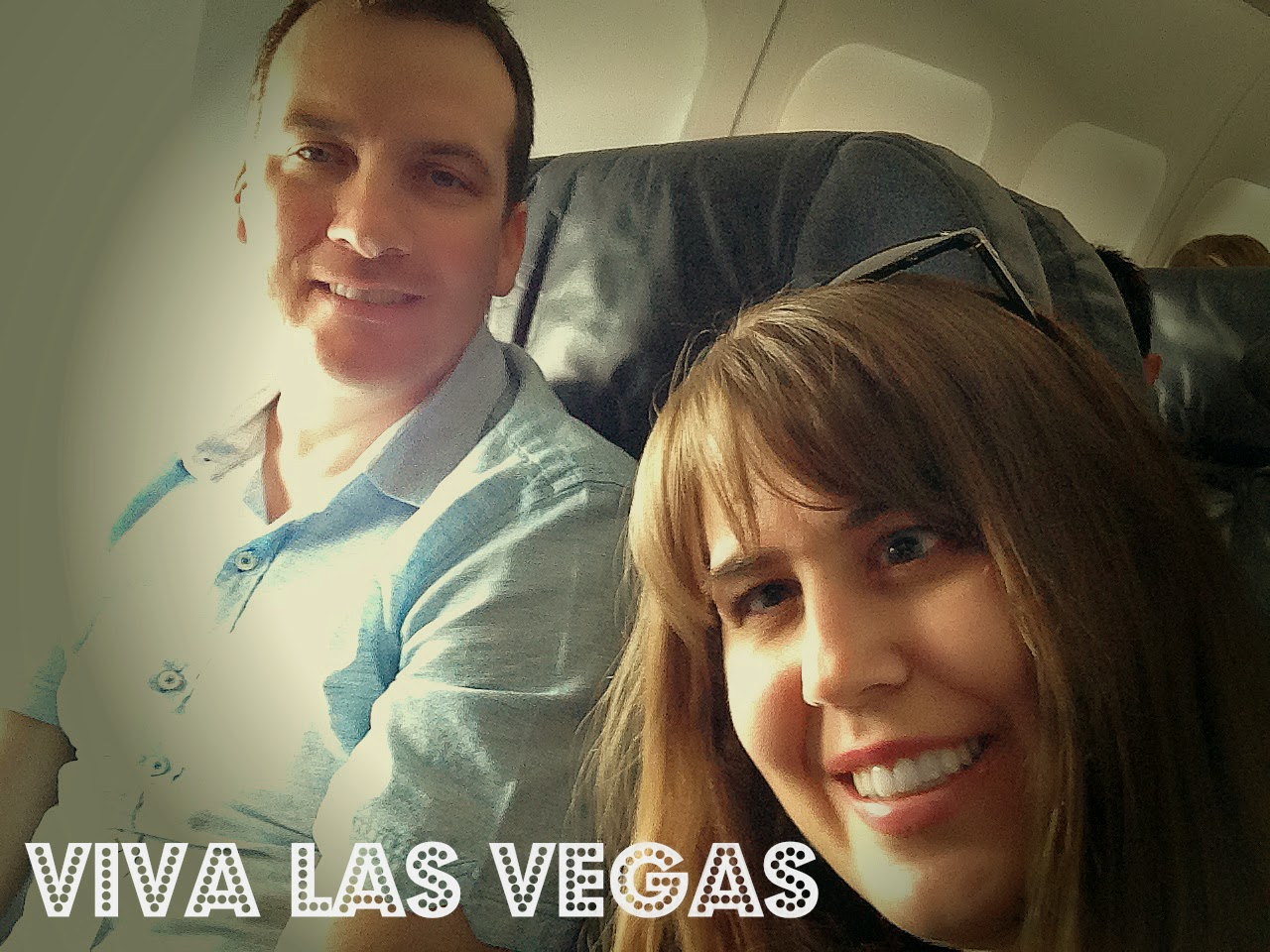 So bright and early Sunday morning a car picked us up for a 9:30am flight on Spirit airlines.  Ever flown Spirit?  Me either until this trip.  I was pleasantly surprised though and that doesn't happen often so I'm going to share.  For a very small fee (like $60 for 2 people round trip) we were able to upgrade our seats to the first few rows on the plane.  These rows have seats in sets of 2 instead of 3.  In no way is this first class.  I mean you still pay for your drinks, your snacks and your bags just like everyone else (this is definitely an a la carte airline).  What it does buy you however is the ability to avoid having to sit next to someone gross, or even worse, in the dreaded middle seat.  Totally worth the money in my opinion because it made for a more comfortable flying experience.  Of course it also helps that the flight to Vegas from San Diego is such a short one.

An hour and a half later we were on the ground and in a cab headed for the Encore at Wynn.  We've stayed in the Wynn tower previously, but this was our first experience at Encore.  I know that Wynn properties aren't for everyone.  They're not center strip and they're pretty out of the way, but that's exactly what I like about them.  I'm all for whooping it up down at Bellagio, but at the end of a long day, I want to get away from the crowds and head back to a serene hotel.

Anyways, my first impression of Encore was great!  We arrived at 11:30 to check-in and were sent right up to our room on the 61st floor.  I just love an early check-in don't you?  There's nothing worse then having to kill time before you can get into your room. 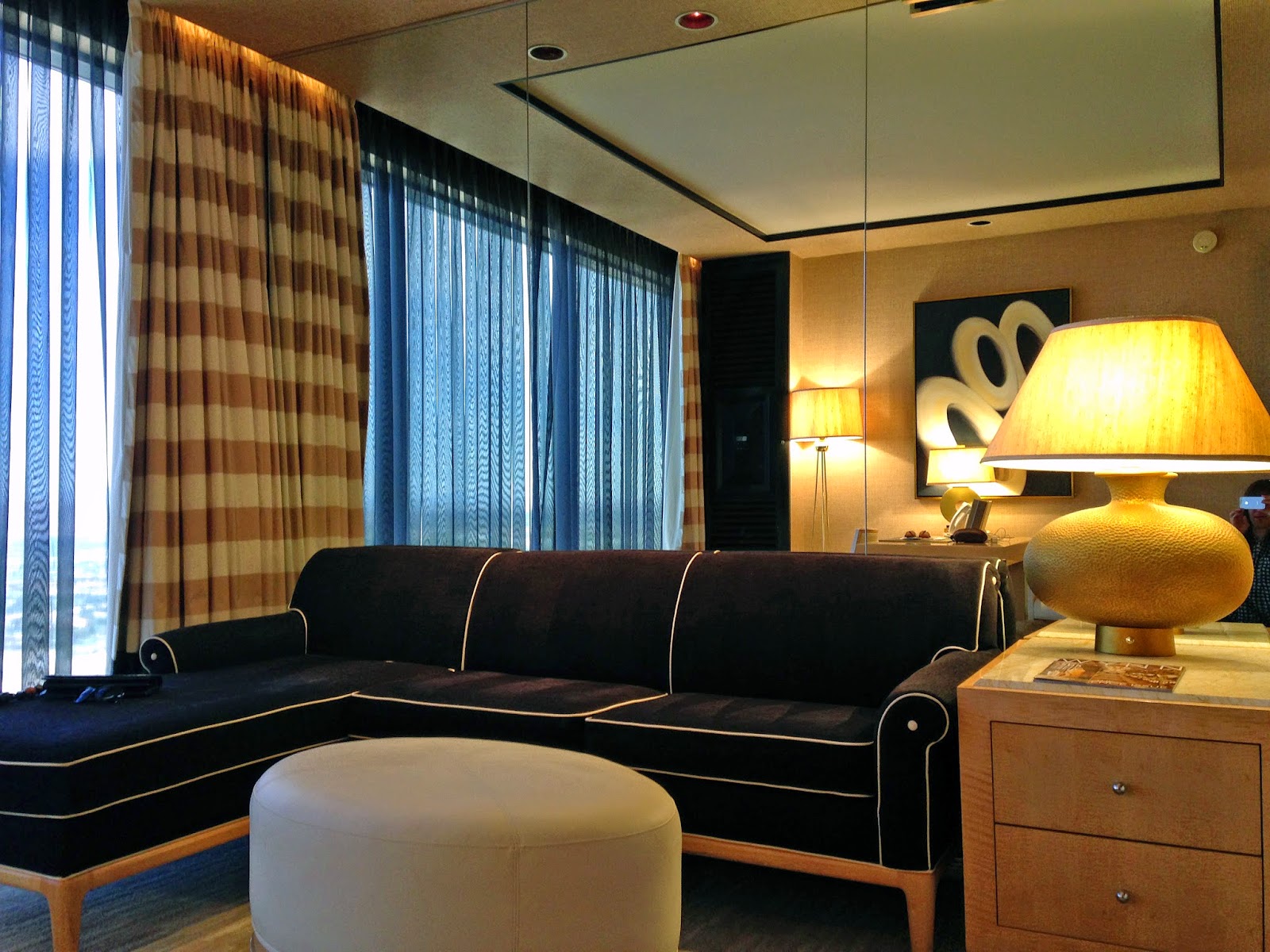 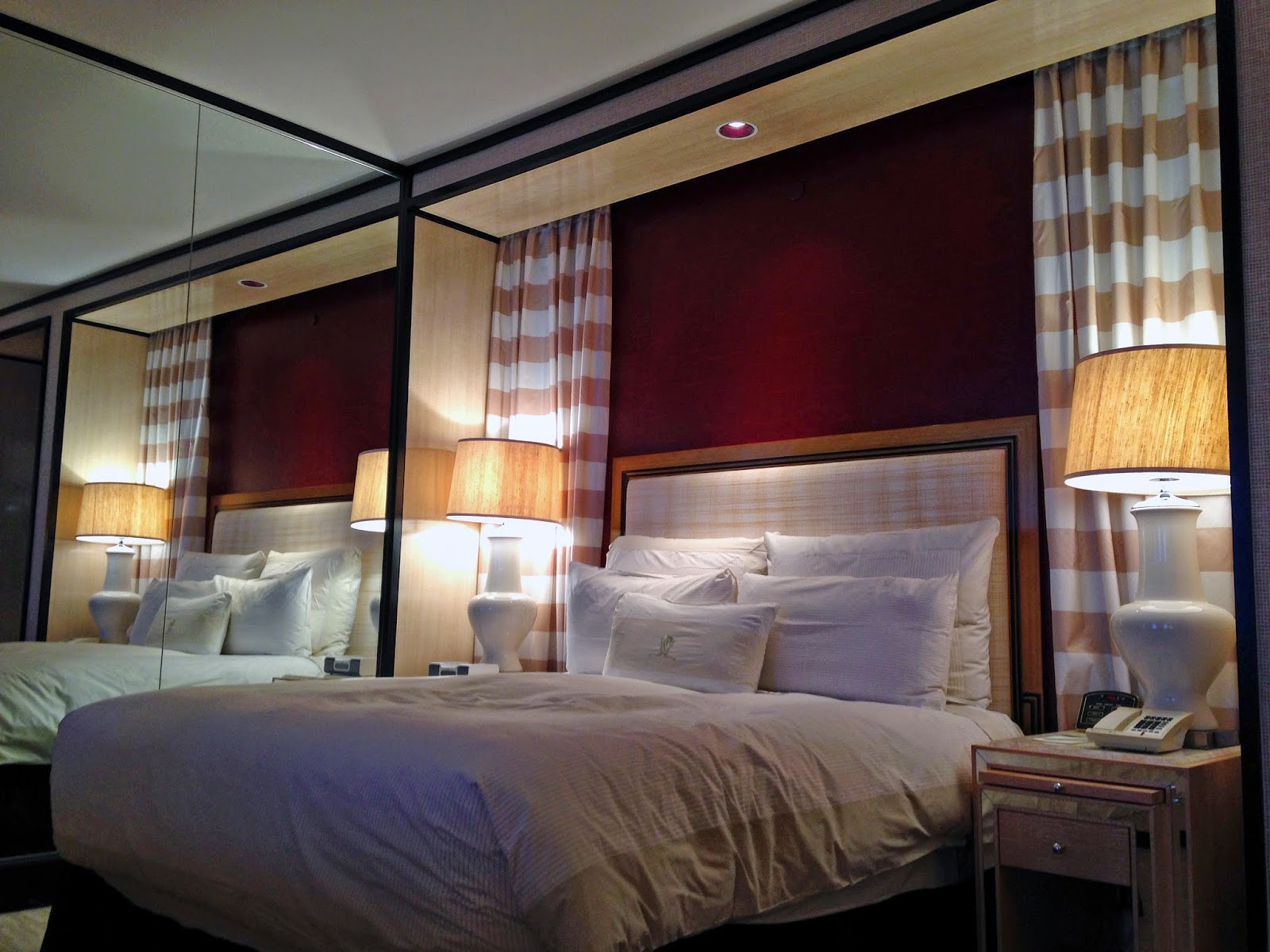 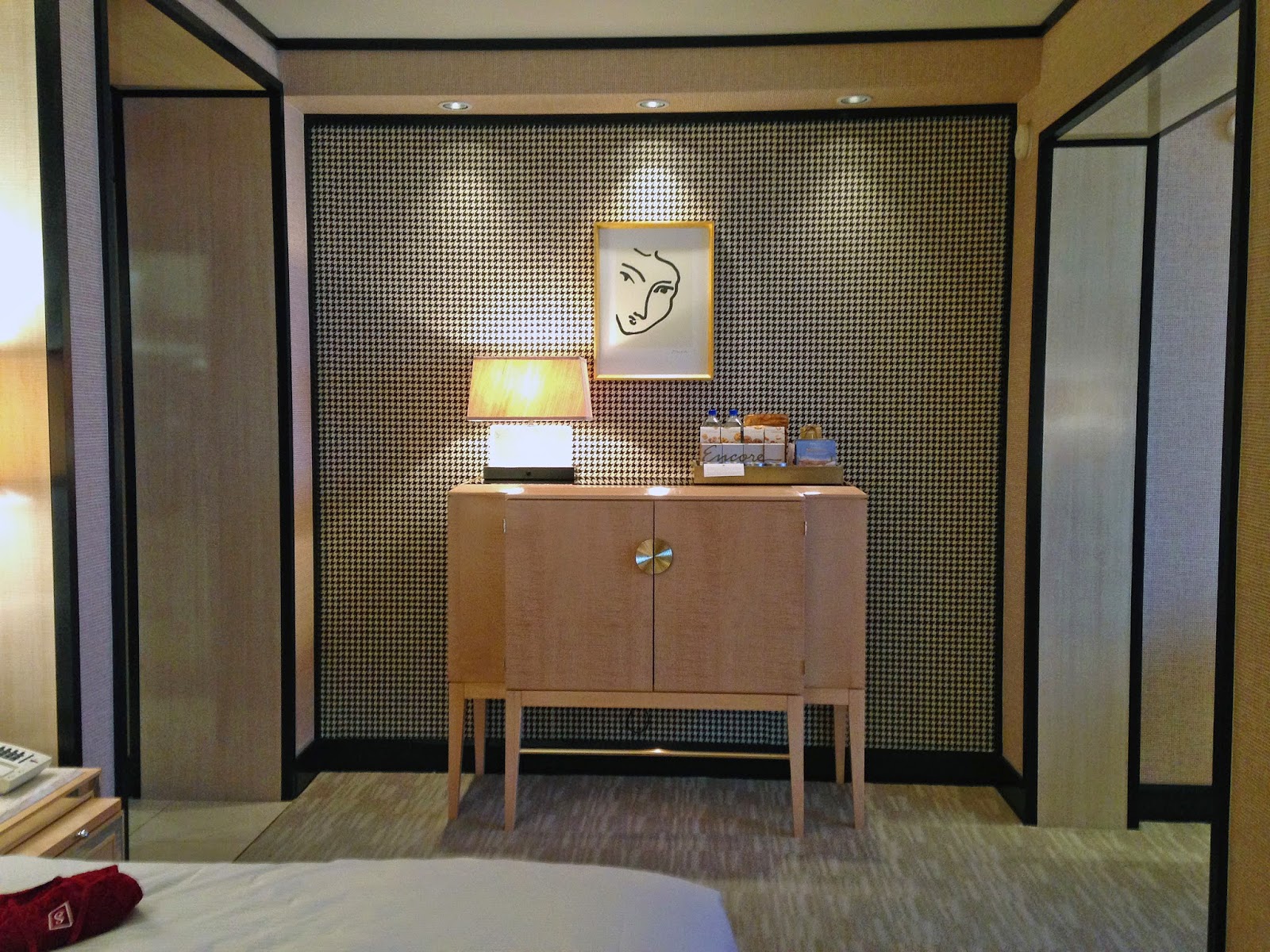 Pretty swanky huh?  Now don't go thinking I'm a baller or anything.  All of the rooms at Encore are suites.  They're huge, and they're lovely, but...I definitely prefer the decor and the smaller/cozier feel of the Wynn rooms.  Cry me a river right.

We quickly got settled in and then headed down for our 12:30 reservation at Country Club for their Sunday Jazz Brunch.  Oh brunch, where do I even begin.  Bottomless mimosas!  Amazing live music.  Some of the best shrimp and grits I've ever had.  Mounds of fresh seafood and carving stations galore.  We were seated inside (I died over the plaid carpet that will one day be in a home of mine) at an oval table and on a leather sofa for two.  The entire experience was so unique and somehow very romantic.  Definitely a great way to kick off our trip.

After brunch we hit the gaming floor where we both proceeded to lose copious amounts of $$$.  I can only take so much so a few hours later I called it quits for the day and headed up to the room to take what I thought would be a long leisurely bath.  Ha!  When I arrived I was greeted by a gift from the construction company I've been working with on the build out of our new corporate headquarters. 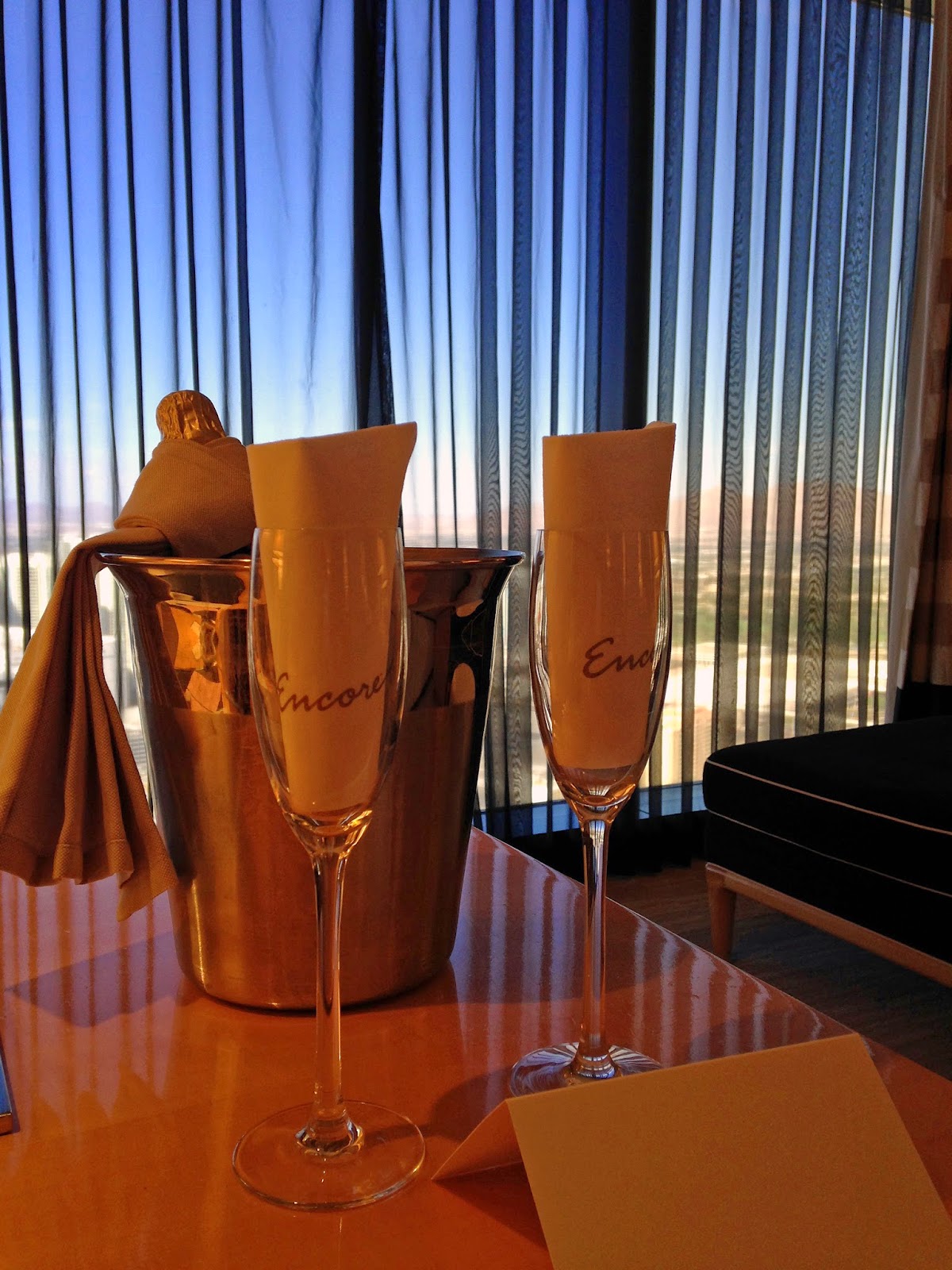 So thoughtful right.  Well I took a second to get the water running in the enormous tub and then came back to write a quick thank you email.  Literally less than 5 minutes later I go in to check on the tub, which I believed would take forever to fill, only to find that it was overflowing.  The entire bathroom was flooded and water had started to flow into the foyer.  Oh god Shannon what have you done!  I quickly turned off the water, opened the drain (which basically required me to get in up to my shoulders-this damn tub was huge), and called housekeeping.  No joke, seconds later a gentleman from the hotels engineering department arrived to "access the situation".  Lucky for me I managed to charm him somehow and he chased off security who had since shown up to write an incident report.  An hour later the mess is corrected and I sent the engineer on his way with a fat tip.

Needless to say my long leisurely bath turned into a super quick 5 minute shower before dinner.  Sinatra, hands down my favorite restaurant anywhere.  We've been a half a dozen times now and I am never disappointed. 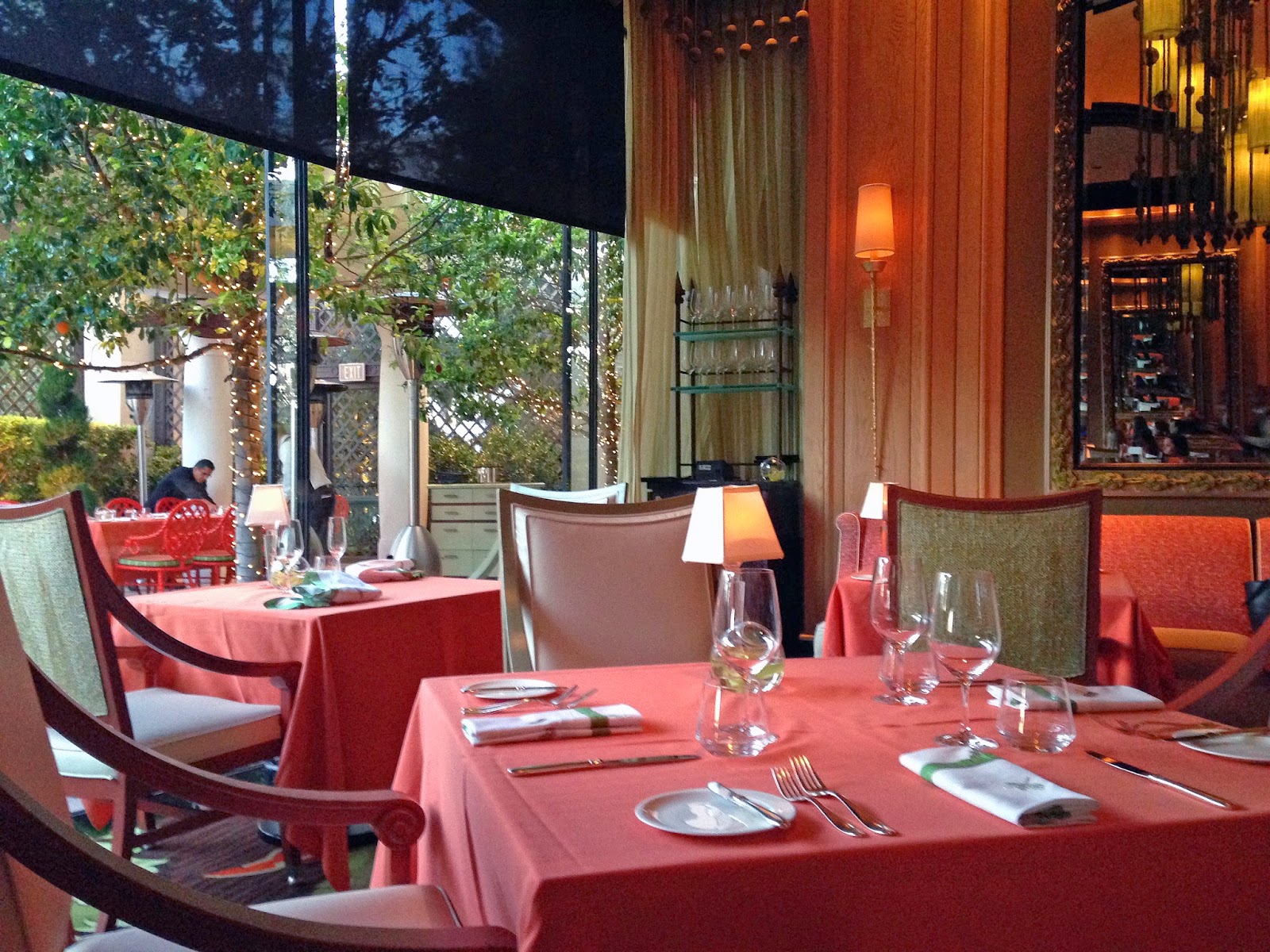 The ambiance is everything.  I love the silk dragonfly napkins so much that I bought 6 from the Wynn Home Store on our last trip.  The lamps on tables (are those for sale too?) are gorgeous.  The color pallet, coral and green.  It appeals to all of my senses and is probably the most beautiful, comfortable space I've ever been in.

The food in insanely good as well.  I started with the meatballs and polenta fries, as well as a caesar salad (not pictured, sorry guys). Dar had the veal parm, which he continues to get because it's that amazing.  I had the spaghetti and clams.  The sauce and pasta were both beyond delicious. 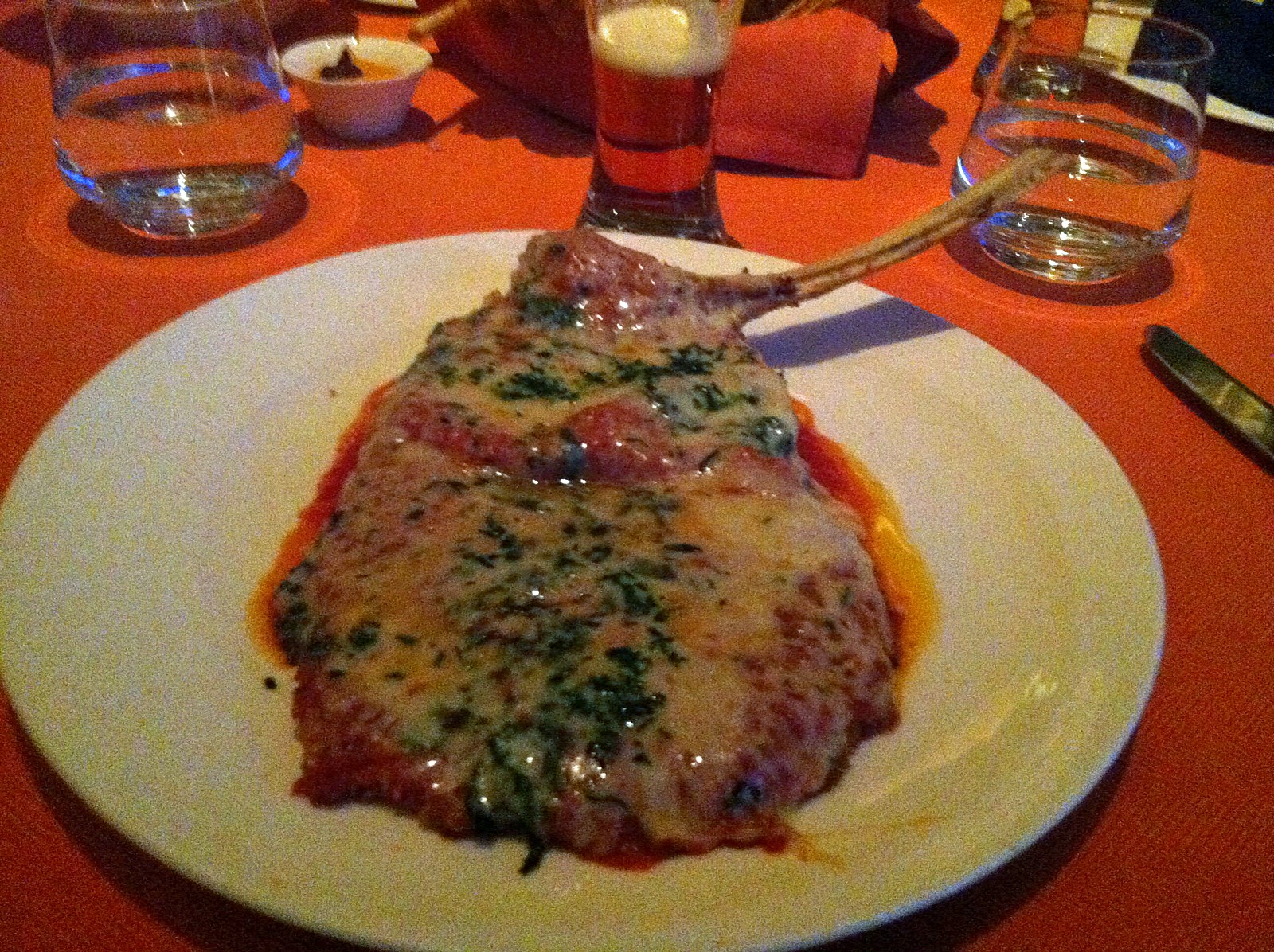 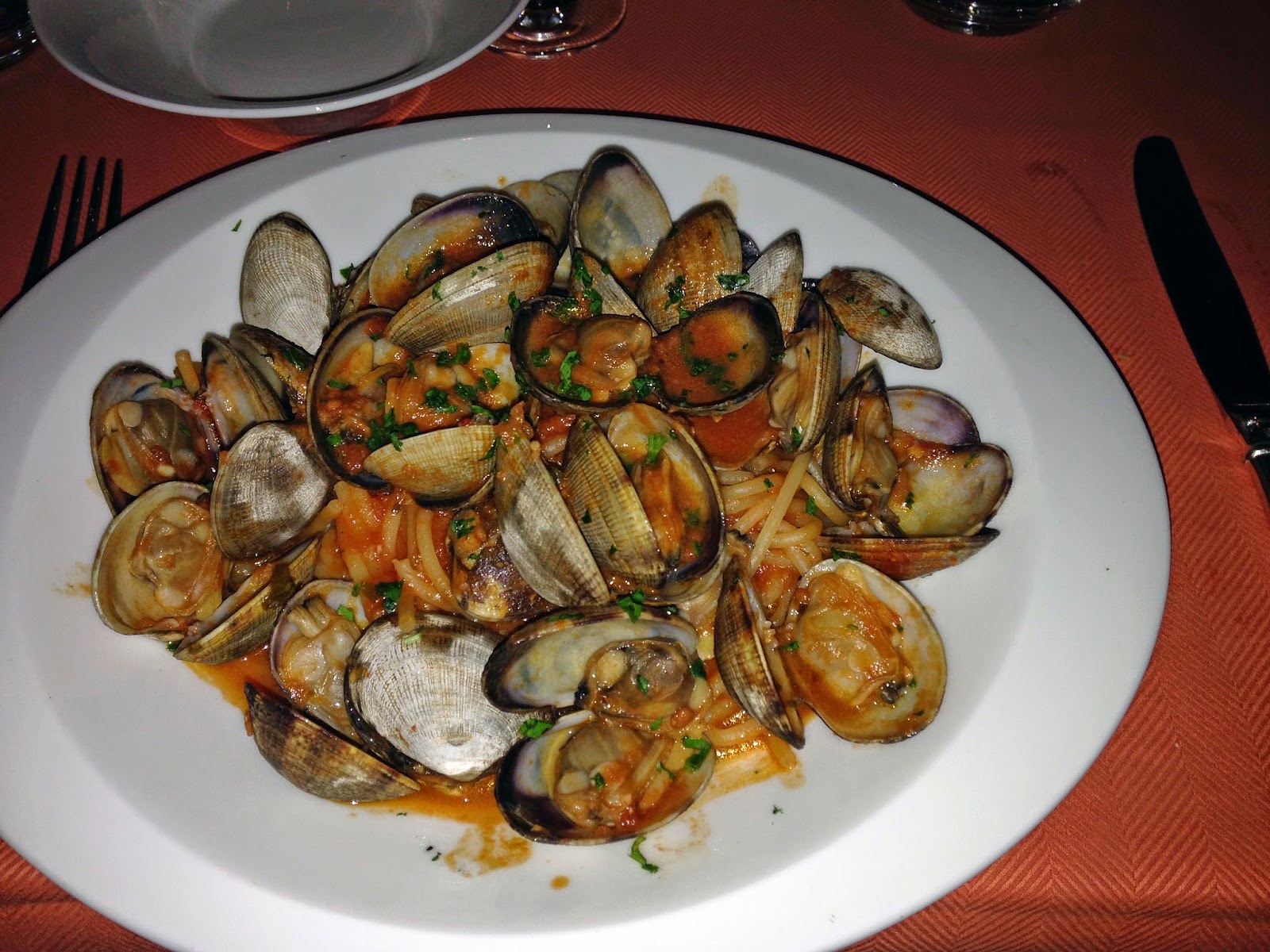 I will say this time around service was not what I've come to know, but I'll let it slide because the food and ambiance more than made up for it.

Our first night always seems to be a late one.  I was up past 12:30, Dar was more like 3:00.  His quote "Vegas is the only place in the world you can roll in at 3:00 and not have your wife question you."  So true!  We have a rule, stay out as late as you want in Vegas, just don't leave the hotel.  Fair enough right.  Well we were off to a slow start the next day so we opted for breakfast in. 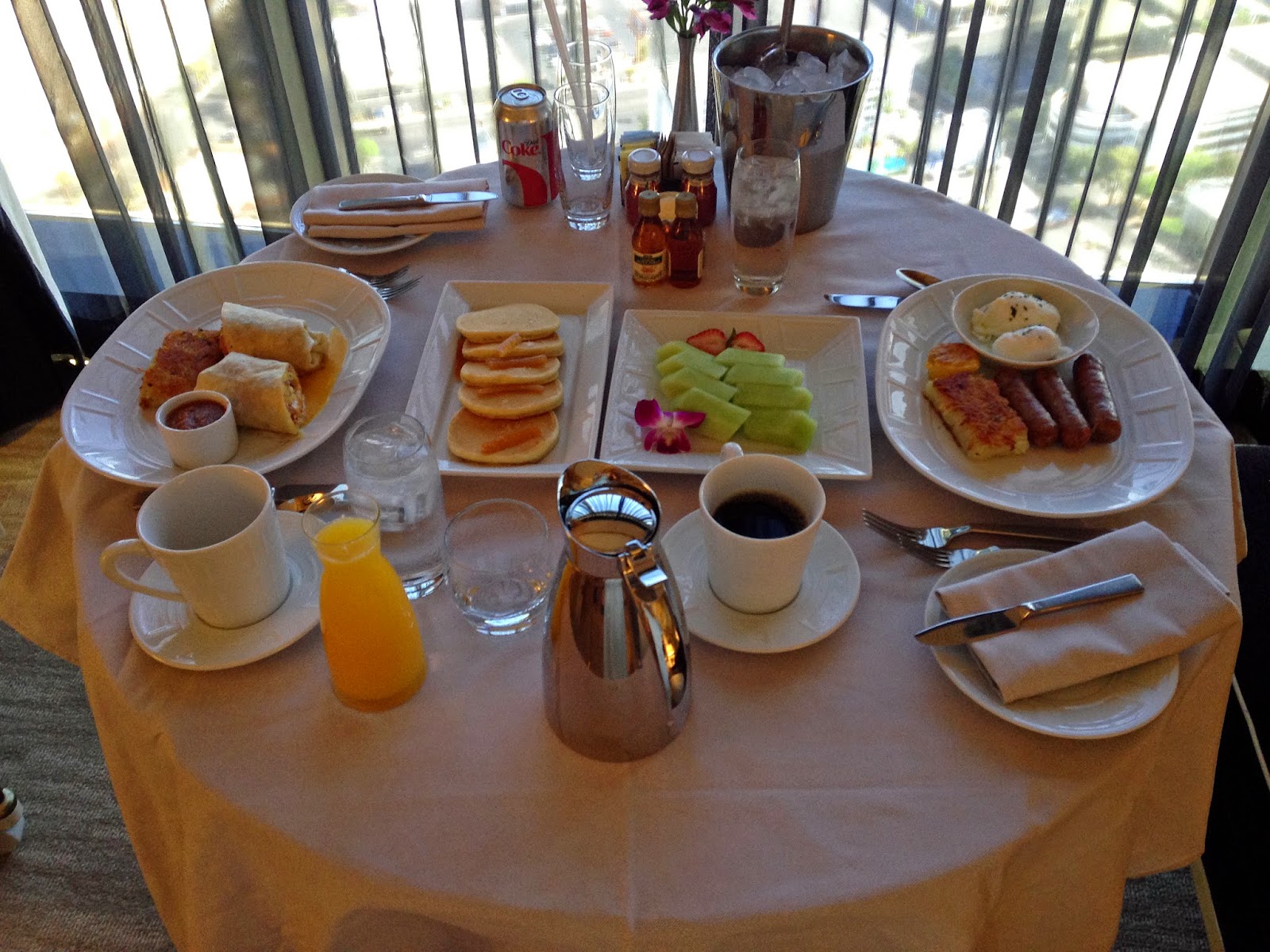 Very good decision.  I just love room service.  As you can see I pretty much ordered everything on the menu (fruit, pancakes, sausage, eggs, potato's).  When I'm rich one day I'll absolutely have a chef on staff who will cook me whatever I want three times a day. 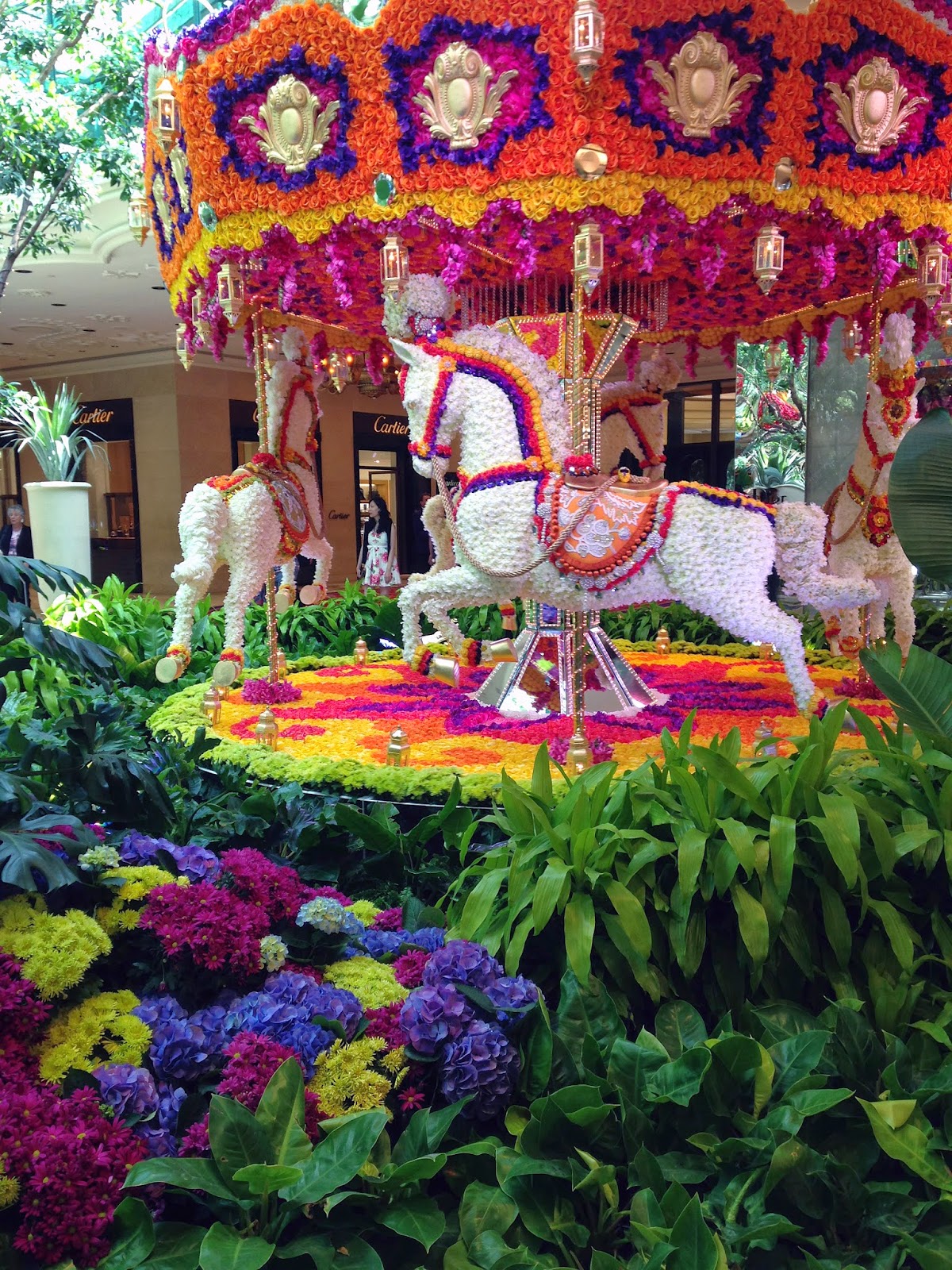 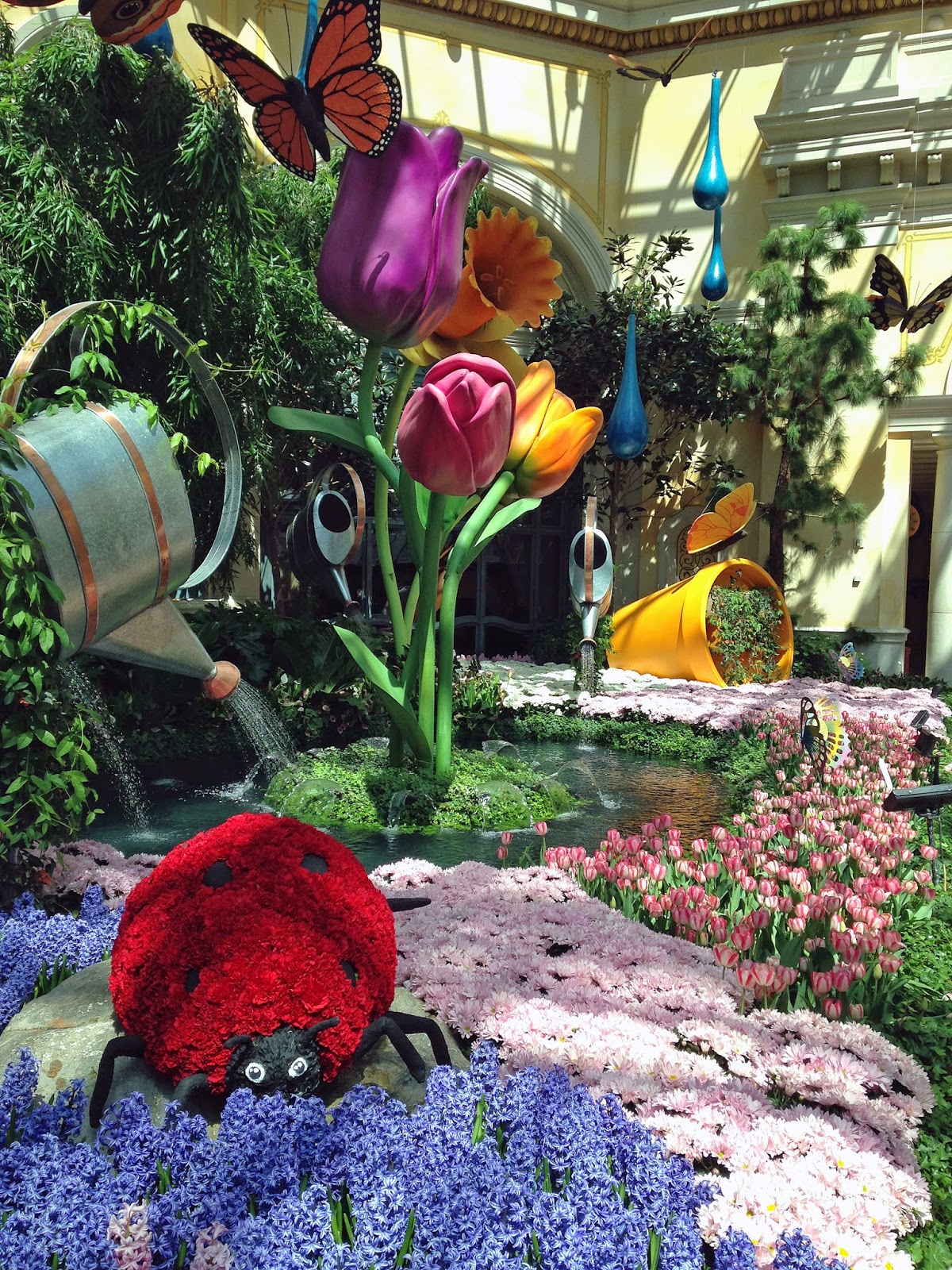 After breakfast we got ourselves ready and cruised down the strip to the Mirage and then to Bellagio.  We got married at Bellagio so it will forever be a special place full of amazing memories for us.  The second you walk though their lobby doors you smell the amazing aroma from the indoor flower gardens, there are butterflies flying around, soft music playing in the background.  It's just such a magical place.  We walked down memory lane for a bit and then proceeded to spend the rest of the afternoon pissing our hard earned money away.  Oh Vegas, we have such a love hate relationship.

Dinner at Prime that night was glorious.  The velvet cushions, the tassels on the drapes.  Prime is a very opulent restaurant with great food and amazing service.  Probably the best way to see the famous Bellagio fountains too.  And again, sorry guys, but I was too busy staring into my lovers eyes and out the window at the fountains to take any pictures of the food (bad blogger).  Luckily the restaurant had a photographer that came around and snapped some shots for us so we were able to document the night.  I know some people find that cheesy, but I love it.  It's nice to have a memento of the evening.  For dinner I had the spring pea soup with bacon and lobster (brilliant), a baby beet salad (not the best I've ever had) and the seafood platter for 2 (which I proceeded to eat entirely on my own).  I washed it all down with a killer black and blue martini (vodka, rosemary and blue cheese stuffed olives).  Dar started with a caesar salad, and then enjoyed a filet and mashed potato (killer potato's). 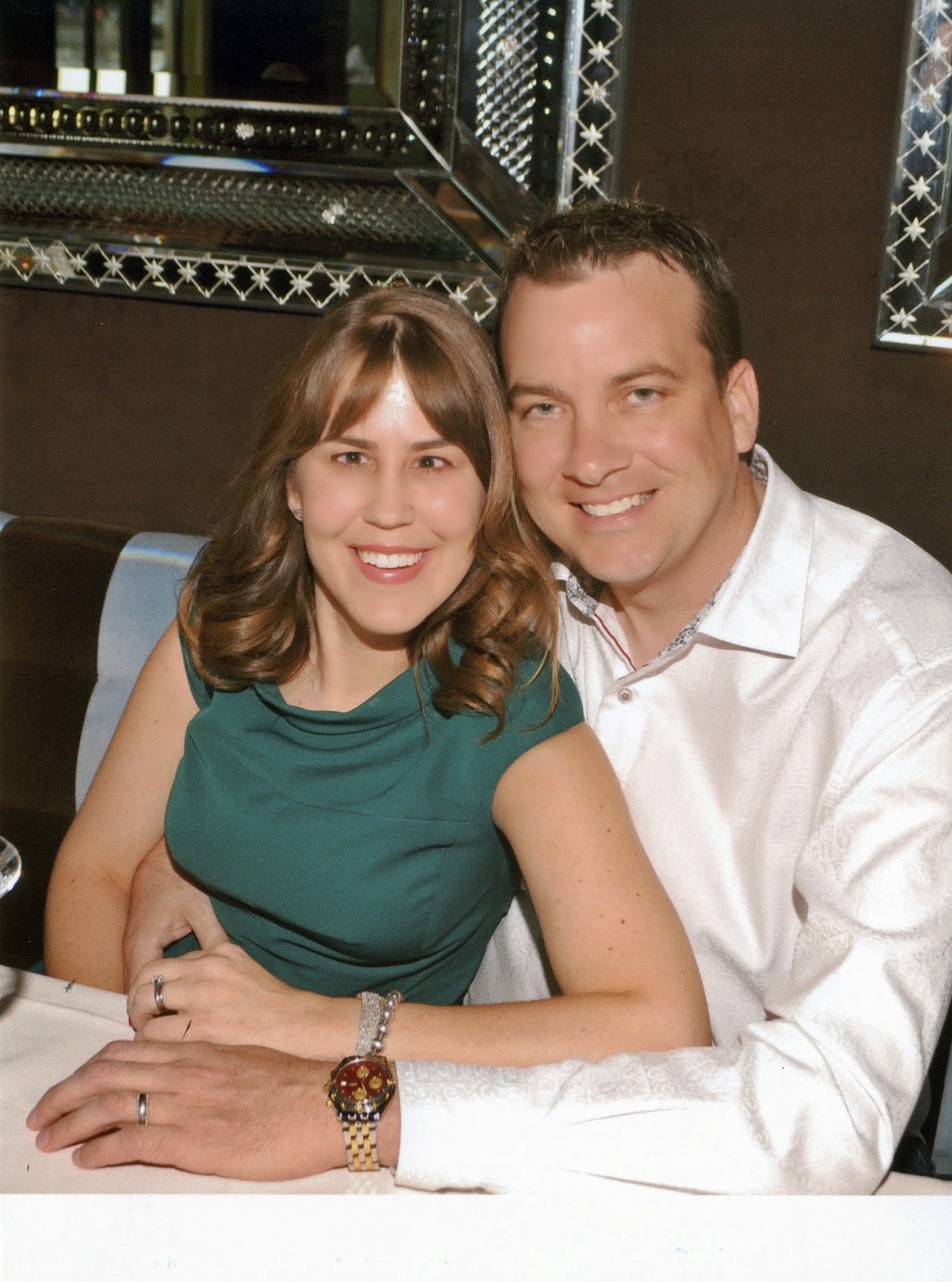 The next day I had a facial at 9:00 and there was no way we were going to make it out of the hotel before then for breakfast so it was room service again!.  My facial turned into a facial and then a massage too so I'm glad I ate beforehand.  Now, I've been to some pretty amazing spas (the Four Seasons Maul, the Inn at Rancho Santa Fe etc) and the Encore Spa is the creme de la creme.  I was literally overwhelmed by it's beauty.  After my facial I almost cried, I just didn't want to leave, hence the last minute decision to add a massage.  There were no cell phones allowed beyond check-in, but seriously, check out their site and see for yourself, it's dreamy.

Our last full day consisted of us emptying what was left in our pockets into slot machines, a late lunch at Holsteins in the Cosmopolitan.   Which by the way, I don't get.  I mean what is all the hype over this hotel all about?  I just don't get it.  Anyways, we had originally planned on a cabana at the pool but after all the food and booze we decided to avoid swimwear like the plague and spent the money on the show instead.  Neither of us had seen a Cirque performance, so we decided on La Reve the Dream and boy what a show it was.  We went for the indulgence package which got us amazing seats, a bottle of champagne, truffles, chocolate covered strawberries and some first class entertainment.  The music was mind blowing, the stunts unbelievable.  What a great experience. 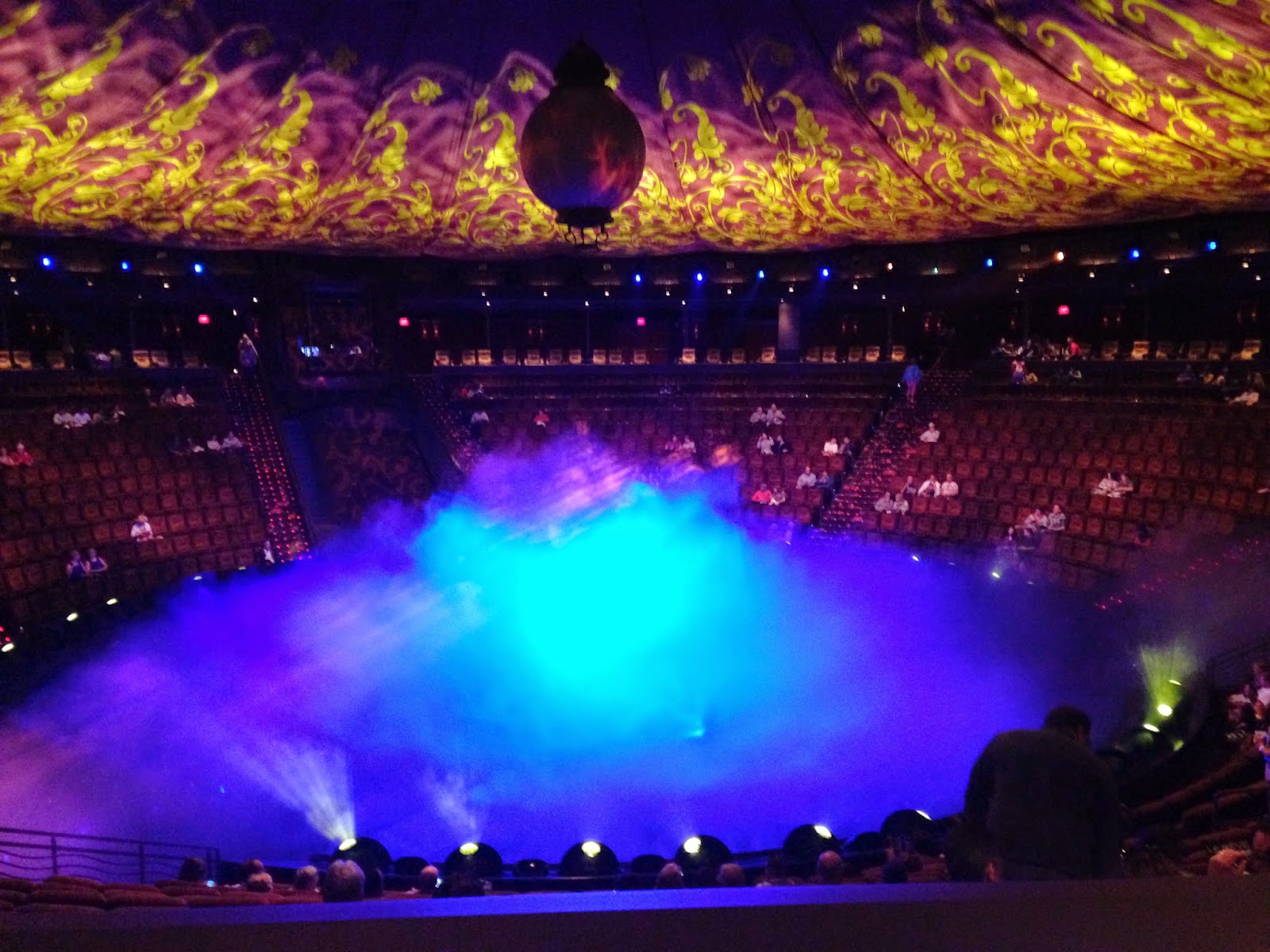 As you can see we did not go on the wining spree that was our last Vegas vacation, but that's why the call it gambling.  Luckily Vegas is full of great restaurants, fancy hotels, amazing shows and all you can drink mimosas.  Until next time.